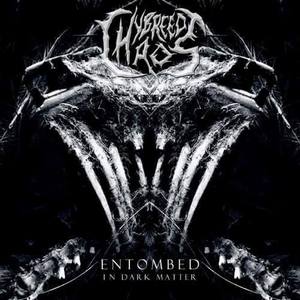 Following up their 2013 release, Dying Dogma, Canadian act Hybreed Chaos do have an interesting take on death metal. It’s clearly death metal when you hear it, but it’s not your by-the-numbers routine that you start playing in your head the second you hear ‘death metal.’ Some promise lies ahead if they can work out a few of the kinks in the system.

There’s a bit of that skronky death metal sound (think Gorguts) on Entombed in Dark Matter but it aligns itself in a sludgy way that avoids getting too overly technical. A well-played maneuver on their part, as there are plenty of those more atmospheric-yet-not-really-tech bands going around lately. The emphasis of the album is clearly on those slower, diabolical sounding riffs that seem to fester and ooze more than gallop. In other words, if you are looking for a blastfest, this isn’t going to be your cup of tea. The music is suitably monstrous though, and the eerie melody here and there is appreciated. However, the one piece holding it all back is the overall time of the album. A number of the tracks pull towards the six minute mark and beyond, but there’s not enough tempo change to warrant the time spent. There were a few times where tracks would meander past their prime and a shorter overall assault might cut down on this feeling.

There’s a lot of potential sitting in the wings with Hybreed Chaos. They have a fresh and enjoyable take on death metal without nestling into a particular pigeon-holing category. With further enrichment and refinement next time around, they are bound to hit many fans radar.