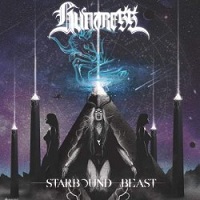 Jill Janus arrived on the metal scene in 2009 and immediately attempted to create a buzz around her feminine mystique as a singer who delved into the occult. The hype seemed to be huge, and the band’s first video “Eight of Swords” really caught everyone’s attention. Unfortunately their Spell Eater debut fell flat and never really lived up to its potential, so when the announcement came about a follow-up album, I was hesitant about what direction they would take.

Much of Starbound Beast continues to follow the pattern established on Spell Eater, but the thrash and black metal touches consistently found on the debut are pushed back here. Arguably, this is essentially a melodic heavy metal album, incorporating the NWOBHM style and adding in some speed metal elements to keep it punchy and catchy. Tracks like “Receiver” and “Spectra Spectral” contain plenty of blistering guitar solos, while “Blood Sisters” and “Starbound Beast” are probably the catchiest songs on this release.

There are tracks like “Destroy Your Life” that cranks up the metal riffing and proves to be one of the strongest numbers. A song like “Oracle” soars to dizzying heights, while Janus matches the thundering riffs with some meaty vocals and top notch heavy metal lyrics. Her strength as a vocalist continues to provide a mix of low end growls and high pitched screams, keeping the music energetic and focused. She even manages to get Lemmy (of Motorhead fame) to write the lyrics for “I Want to Fuck You to Death” and it proves to be another catchy song that will probably stand out the most.

Starbound Beast is consistently better than its predecessor and what I liked most is the constant leanings towards an old-school sound. The NWOBHM flavor really adds to the proceedings and it reflects in the song writing and overall performance. Janus continues to impress, projecting her seductive image and forging her own mystique in the heavy metal community with great confidence. I like the path she has chosen and hope Huntress continues to soar to greater heights. Starbound Beast is certainly proving to do just that.