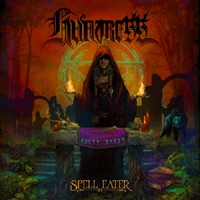 If Huntress were competing against other like-minded female-fronted metal bands in the promotional picture department, they’d probably win. Like, how could any red-blooded metal dude not be pleased with the image of scantily-clad singer Jill Janus? Blistering doesn’t mind such visuals either, although brunettes have come to have a much wider appeal for this scribe. And this is not a segue into a predictable blonde joke; rather, it’s one of those “style over substances” happenings. Spell Eater is quite the dud.

Playing the now way too familiar brand of retro classic metal/thrash, Huntress pin their hopes on Janus and her crooked cackle and caw, one that is simply way too overbearing and at times, annoying. Janus does have a somewhat formidable tone to her vocals; it’s just that she’s often found over-exerting herself, most notably on “Sleep And Death” and the very silly “Terror,” a woebegone tale of school shootings and nightmares. Furthermore, Janus would be best advised to refrain from any type of raspy and/or screamed vocals – they’re precariously close to the almost-as-bad Maria Brink of In This Moment.

Those in search for some gritty proto-thrash will certainly find it here, as Spell Eater has an ample amount of Maiden-happy melodies, forceful riff-action and complex song arrangements. Such traits are found on jams like “Senicide,” the speedy “Snow Witch,” and Mercyful Fate-like (in the riff and sequencing department) “Night Rape.” Of course, one has to wade through Janus’s relentless vocals to make any sense out of these songs, so it’s a bit of a wash after ten songs.

For the sake of comparison, Huntress doesn’t match up very well with Christian Mistress, a band with virtually the same components, yet without the need to parade its singer around in barely-there garb. Therefore, Christian Mistress’s new Possession wipes the floor with Spell Eater, snazzy promotional pictures or not.