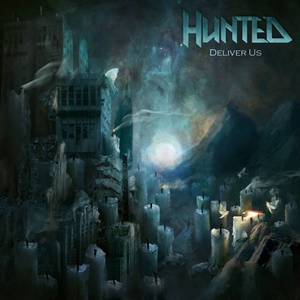 Back after a decade-long plus break from the studio, UK band Hunted have a lot to prove on their second album Deliver Us. Blending a musical stew of power/progressive heavy metal influences from North America and domestic European shores, listeners can expect performances and intricacies that contain a bevy of 80’s/90’s trademarks, as well as taking into consideration some of the advantages of modern technology to keep the sound a bit more up to date. These ten tracks (plus an Angeles Del Infierno bonus cover on the CD version) bristle with multifaceted vocal melodies, interesting tempo changes, dynamic atmosphere, and a sense of confidence that will appease many followers into Nevermore, Control Denied, Destiny’s End, and newer acts like Silver Talon or Witherfall.

Leaving no element to chance, the quartet channel the multi-octave vocal prowess and natural upper register abilities of Chris G. to their advantage. Check out the extreme blast beat/tremolo picking spots or mid-tempo crunchy/tribal-like sequences during “Burning Ones” or the bass/rhythm progressive interplay during the anthem-oriented “Misled” that illustrates the diverse push/pull areas these gentlemen employ to serve the song at hand. As a guitarist Steve Barberini tasteful throws in a mix of neoclassical aspects against his heavy, power, and progressive tricks – check out some of the swift licks and squeals to “Salvation on a String” that support the natural hooks, while “Time Will Tell” has that guitar heroic nuance people have come to enjoy from classic Yngwie Malmsteen. Intertwining a few seven to eight-minute cuts that expand the atmosphere instrumentally with those normal radio-length, focused offerings ensure a flow which never flatlines – “For the Blind” a slow burn satisfying effort, while “Our Final Embrace” is a morose ballad that ramps up in electric, haunting intensity by the conclusion. The minor complaint for Deliver Us lies in the drum tones – as Matt ‘Animal’ Thomas is more than a capable player but comes across as very cyber/digitized especially in the kick and snare departments.

We know plenty of people who miss the efforts of Nevermore and Control Denied – so Hunted will find their audience. Deliver Us has the right songwriting outlook and intricacies honed down tight into memorable melodies, hooks, and moments – the ideal combination for sustained appeal.