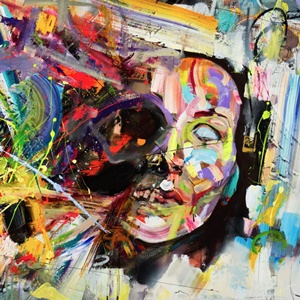 Previously covered in an October 2015 Rapid Fire column by our co-editor Kyle for their Glass EP, Finnish progressive metal act Humavoid have been pumping out a series of singles in the interim before signing with Noble Demon for their second full-length Lidless. The four-piece feature a lot of unique elements to their sound – including dual female/male vocals that can be extreme and clean when necessary, plus a mix of keyboards and guitars beyond their forays into the symphonic, jazz, and djent angles. It’s a heady experience that may take multiple listens to catch all the swings, swirls, and twists lobbed your way – but it’s quite a worthwhile experience that can captivate those who love technical prowess, progressive insanity, and yet this underlying sense of groove against all the musicality and rhythm volleying thrown about.

It’s always interesting to hear guitars against piano hitting odd notes as the gang background support vocals delve against Meshuggah-oriented djent drum patterns – while keyboardist Suvimarja Halmetoja and guitarist Niko Kalliojärvi vie for your vocal attention through a series of caustic screams and subtle growls. Whether speedy in the unison time signature juggle-fest that is the title track or the relatively calmer “What You Hide” where Suvimaria gains some modest attention for her clean, alternative verse abilities, Humavoid force the listener to succumb to their hypnotic combinations – at times jumping along terrain previously covered by Voivod, Atheist, and the aforementioned Meshuggah, just not ever at the same time quite like this. Occasionally allowing the bass and piano to command attention before Niko’s guitar combinations are set to stun mode, there’s just so much to embrace – but placed in such a logical construct so that the brain and body can process the instrumentation and grooves/hooks properly. Check out the atmospheric swells during the stair step aggressive maneuvers for “The Breathing Method”, the mini-breakdowns against some cyber-like keyboard strains building tension (and anticipation) for the next passage. The under one-minute instrumentals (“Inside 1” and “Inside 2”) allow for brief respite, while the closing seven-minute epics “Undercurrent” and “Drywall Cracks” allow Humavoid to stretch in their instrumental prowess, the former featuring a lot of low-end crunch and bounce while the latter contains some sinister, circus-oriented keyboard sounds and soothing melodies midway through that end the record in a peaceful manner.

Humavoid have been active since 2013 – and Lidless will get the underground buzz going more for the band. Especially for those who love progressive music with aggression and unyielding obligation to push the parameters of the genre.