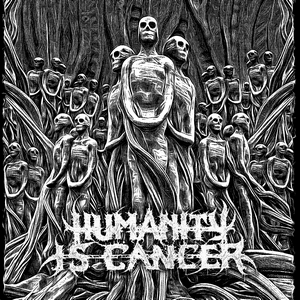 An intriguing backstory with this one, as the songs were actually all written a few years ago but the band was put on hold by Redefining Darkness label owner Thomas Haywood as he began to get the label up and running. Nonetheless, death metal fanatics should be quite pleased when they hear the results of this one. Worth the wait would be the simplest way to sum it up.

Death metal that simply hits hard and gets out – nothing fancy, no gimmicks, no tricks. Humanity is Cancer’s only mission is bludgeoning, and they dole it out with cruel efficiency. The short EP is absolutely relentless, in the best way possible, as the band kicks everything into high gear and delivers nothing but frenetic energy and heaviness. Hate Eternal, Malevolent Creation, and Cannibal Corpse are good starting points, sound-wise, as they unleash intensity around every corner. The vocals are nice and upfront, augmenting the riffing and drum battery, and the riffs are frequently speed-driven but still retain a solid memorability to them. Even when they slow down a bit for the final cut, “Beyond Salvation,” the grooves they unload harness just as much weight as the faster stuff, as well as showing them to be a more dynamic force. Effective solos round things out, again memorable without being too flashy or drowned in tech influence.

As a shorter release, Humanity is Cancer works as a solid introduction to the band and their furious sound. Short enough to rip through it a few times in a row without getting bored, but there’s enough meat here to also satisfy those looking for some well-done death metal with an emphasis on both hooks and brutality.