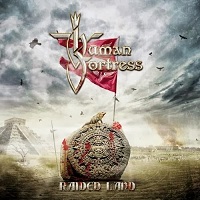 Recovering your fledgling fanbase can be tough in today’s overcrowded metal scene. Check out the new release bin from week to week and expect 20 times the number of albums hitting the racks or digital landscape than even a decade before. So imagine the shock and awe when this German epic power metal band Human Fortress lobbed the proverbial ‘change-up’ with their third album Eternal Empire in 2008, causing a mass exodus in terms of membership and sales for their modern/ metal-core-like vocal employment and Pantera-oriented staccato guitar tone.

Five years later, their fourth album Raided Land is a valiant step to make amends. Starting with new vocalist Gus Monsanto (Adagio, ex-Revolution Renaissance), the melodies are rich with bluesy spirit in a way I haven’t heard since the underrated Bleed record from Angel Dust. Musically “The Chosen One” and “Under Siege” storm the sonic landscape with driving stacked power riffs and keyboard parts that never overpower the mix – Teutonic once again with musicality and the resonance you expect from epic-oriented, melody-driven power metal.

When the band chooses to change things up a bit, it is more from a rhythmic or arrangement standpoint. Be it the circular riff aspect against the triplet snare hits from Apostolos Zaios on “Shelter” or the dramatic, somber closing cut “Guard the Blind” that features dark guitar harmonies and orchestral keyboards that Kamelot fans go bonkers for, “Raided Land” succeeds due to its conviction/ execution duality.

You won’t mistake Human Fortress for Helloween or Gamma Ray in the sense of elevating tempos and tailoring choruses for sing-a-longs. I do think choosing the right people behind the scenes (the album was mixed by Orden Ogan’s mainman Seeb Levermann) gives Raided Land the proper sonic touch to make this the perfect comeback for their career.