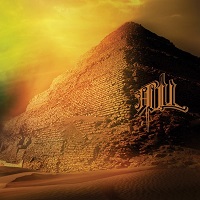 Despite getting off to a doomy start and progressing onto some definite Baroness-style southern-ish metal, this album by Brooklyn five-piece Hull fails to strike the mark on many levels. Despite drawing comparisons with Mastodon, occasionally calling to mind Cult Of Luna and drifting around the heavier, cerebral Neurosis end of the spectrum, they never reach the heights of those bands

. And that’s simply where the problem lies. There’s a ready-made market for Hull out there, but the only thing is, after great recent albums from those aforementioned, mentioned acts standards are high. It’s possible that saturation point of the genre has been reached.

Songs like “Transition” open with soft passages and sounds flitter in the background. “Deliverance” has some lovely guitar

interplay at the beginning too and it’s here they really do nod towards Baroness. Just not as good as that band, but also a little dirtier and with less groove. “Healer” has hints of Torche hanging of it and a brilliant middle eight. The use of multiple vocals is interesting, but again, has been done better elsewhere. The overall feeling when spending time with Sole Lord is that you’d unfortunately rather be listening to something better.