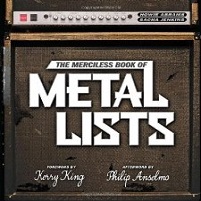 We like lists. Grocery ones, too. They’re often a way for us metal folk to get our thoughts in order, to make sense of the deluge of releases that come out every year, and find the proper pecking order. So when the tandem of Howie Abrams and Sacha Jenkins revealed plans for their own metal book of lists, titled The Merciless Book of Metal Lists, it was welcomed with open arms…and with the pre-formed notion that disagreement would be in the house. And it was.

Both Abrams and Jenkins are industry vets, Abrams having done time as A&R man for various labels, and Jenkins owning vast experience in publishing music books and magazines. From their combined experience and knowledge, the two put together a wide-ranging book of various metal lists, from the various “best-of’s” (bands, albums, guitarists, etc.), to the worst, including album covers, videos, and more. The book is kept fairly high-level, meaning, those with deft knowledge of metal’s seething underbelly might not be fully satisfied. Can’t please everyone, though.

A few gripes are to be found across The Merciless Book of Metal Lists, namely the inclusion of Iron Maiden’s Somewhere in Time as one of the top “shark-jumping” albums, and notation of Judas Priest’s “Metal Gods” as one of the top songs about metal, when it was really about robots. Small potatoes. With great guest lists from the likes of Gary Holt (Exodus), Danny Lilker (Nuclear Assault/Brutal Truth), Max Cavalera, and more, and a coherent afterward from Phil Anselmo, The Merciless Book of Metal Lists is something capable of being picked up for reference time and time again.