Hoth’s 2012 debut, Infinite Darkness, was recently featured here at DR in a Sifting Through Bandcamp article.  Unique in its devotion to the Star Wars films (why aren’t more bands doing this), it was a fun and entertaining melodic death romp with some black metal tossed in.  As referenced in said article, it was “metal plus Star Wars, what’s not to like” and it told darkened tales of the Star Wars universe.  Oathbreaker sees the band narrowing their focus on a concept album (no spoilers!) and massively upping their game.  The tagline for Oathbreaker should be “fantastic blackened melodic death metal plus Star Wars, which makes it even more awesome.”

There is a huge leap in songwriting and overall maturity on Oathbreaker compared to its predecessor.  Perhaps this stems from the focus on creating an overall tale as opposed to a selection of songs.  Oathbreaker gels as well as any other concept album out there, with a number of acoustic and synth moments within the songs (no cheap instrumental fillers here) that help set a number of moods.  Apparently, the band was striving for an overall feeling of increased bleakness as you journey from the first to the last song and that has clearly been accomplished.  The hopeful acoustics that lead into the first riffs of “A Blighted Hope” or even the chanted vocals on “Serpentine Whispers” have an upbeat tone, but as you move further along the album, you encounter more darkness and despair breaking through.  The final two tracks (“Oblivion” and “Despair”) mostly abandon the hopeful beginnings and feel more cold and bleak, much like the fitting artwork that adorns the cover.

Despite the concept and overall tone, there isn’t a track that doesn’t stand out on it’s own.  Full of melodic riffs as displayed on “Acolyte of the Tenebrous Night” or “A Blighted Hope,” each track begs to be replayed, even if the greatest enjoyment comes from listening straight from beginning to end.  With the level of progression made from Infinite Darkness, the potential for future material is just insane.  This should be at the top of any melodic death or black metal fans purchase list, even if they don’t like Star Wars. 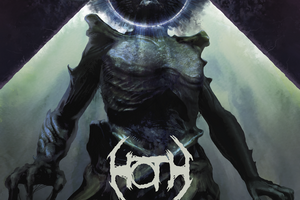