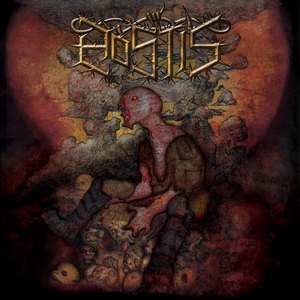 Usually when many (this writer included) think about thrash/death, the sound seems to be more in tune with a modern production and sentiment. Occasionally with a more Swedish tone to accompany it, per say. Serbia’s Hostis eschew these notions entirely, instead focusing on a riff-heavy bonanza that has an older yet more timeless feel to its blend of death-influenced thrash metal.

Starting things off with an instrumental track that’s almost 6-minutes in tone could be considered a risky move, but Hostis brings so many riffs to the table that you might not even pick up on the fact that the first song (the title track) contains no vocals. They don’t introduce them until track two, and this is where most of the death metal influences come into play. Low, throaty growls that pack plenty of presence takes the stage at this point, and play nicely off of the breakneck, thrashy riffs. The old school, thrashy riffs are a treat, which will certainly appeal to fans of Slayer/Testament but ‘90s death metal vocals (and occasional brutality) ratchet the brutality just a smidge further. Some melodic leads and melodies also find their way into Hostis’ sound, keeping the songs from feeling too familiar as time moves on – an especially useful skill when each track moves past the 5-minute mark. All in all, there’s a nice interplay of the death and thrash dynamics in each song, pushing the band further instead of impeding them.

Admittedly, the influences are quick to catch but Hostis is more about the songwriting chops and even more importantly, all about the riff. If you are looking for an album that will satiate your need for thrash-forward riffing and some strong leadwork, Hostis is a new act that should be pretty easy to get behind and support.