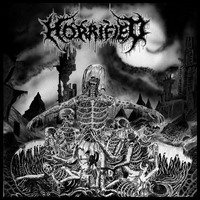 The last few years have seen a major uptick in the number of old school death metal revivalist movement. You can’t seem to turn a corner without running into a band that directly plagiarizes one of the greats: Entombed and Incantation seem to be the clear favorites, with Death following right behind. Perhaps that’s why the blurrier area of Descent into Putridity is a little easier to take.

Instead of making a beeline for the Sunlight Studios, it seems Horrified made a few quick stops to several other countries first. There are some distinct Asphyx and Autopsy influences out front, as well as the more traditionally noted buzzsaw crunch that you’d associate with a vast number of Dismember wannabes. What keeps Horrified afloat is that the guitar buzz revels in filth, giving it an almost muddy approach at times that also blends with some Death-like leadwork to cut away from overtly aggressive approach. The band does seem to be at their best with the faster, thrashier tempos and have a tendency to linger around this speed. When the band does crank down the tempo, there is some notable groove (the title track, for instance) that works in Horrified’s favor. Vocally, there is also a bit of an Asphyx influence as well, keeping it from becoming yet another one-note growl bit that is destined to sink the ship.

While you may have “heard it all before” when it comes to these sorts of bands, Descent into Putridity is an enjoyable romp that benefits from a bit more diversity than the usual. This is some old school death metal that keeps the fun in mind and should be found amicable by those who just can’t get their fix.