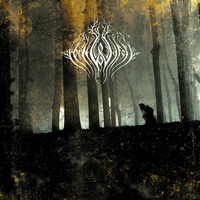 Eschewing the standard black metal practice of producing multiple demos, EPs, or splits before a proper full-length, Italy’s Hornwood Fell probably could have used some good ‘ole growing pains before releasing their self-titled debut. The band formed last year, and is made up of a bunch of relatively established black metal musicians, which should at least give this band some type of edge. But alas, it’s not be, for this is a debut supposedly spurred on by the canons of yesteryear Borknagar, Darkthrone, Ulver, yet is as undeviating from its stated course as possible.

The chance occurrence that this album would resemble any of the above-mentioned trio’s early works may only come in the form of the first Borknagar album, which coincidentally, was also self-titled. Recorded right after main dude Oystein G. Brun made a clean break from Molested, Bork’s first album lacked the sterling dynamics that would come about on its The Olden Domain follow-up. In essence, it was a cacophonous, unimaginative effort that failed to use Garm’s vocals properly, in addition to being sung entirely in Norwegian. Granted, that doesn’t happen with Hornwood Fell (the Norwegian vocals part), but a similar plot ensues, for the band really knows only one way in which to operate: Full-blast, and aloof.

There’s little doubt where many of these chord structures and harmonic combinations are swiped from, which is fine – a lot of bands have done it. Trouble is, the first moment that is at least halfway engaging comes in the form of the closing acoustic number “VinterFresa Part II.” By then, the album has turned into a hurried, harried bag of ideas with little or no clue where they’re going. Guess this means one thing: The demo phase should never be underestimated.