A hair surprised Sabina Claussen doesn’t get more credit in the female extreme metal vocalist discussion. She’s been holding court since the early 80s among the fierce Boys Club that is the German metal scene, establishing Holy Moses as one of the country’s true bastions of thrash. And sure, the band has largely been mostly a non-entity on this side of the pond, yet there’s no mistaking the production and, partial influence of Holy Moses. With that said, the band’s new Redefined Mayhem continues down the same path as most of their previous releases, but there’s something mildly satisfying about hearing a woman tear up her larynx after so long. (Note: This scribe’s significant other has a very petite and “mouse”-like voice.)

Upholding many of the truisms found in German thrash (no mosh parts, searing solos, top-notch musicianship), Claussen and crew roll on through 13 cuts of no-frills thrashin’, with an accordingly vast amount of contempt coming from the frontwoman’s mouth. One doesn’t need to look any further than the biting “Undead Dogs” (love the cadence in the chorus) or near-death metal “Redemption of the Shattered,” a tune that emerges as the album’s most cut-throat and for lack of a better term, “intense” number.

Holy Moses may not qualify for “institution” status in their homeland or even mainland Europe, but it’s hard to divvy out the complaints with an album like Redefined Mayhem. The album’s focused, non-wavering approach to blistering thrash is of the commendable variety, made even more impressive that the band (like their countrymen Tankard) have just crested the 30-year mark. So what does that mean? Is 30 the new 10 in German thrash terms? 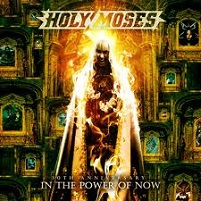