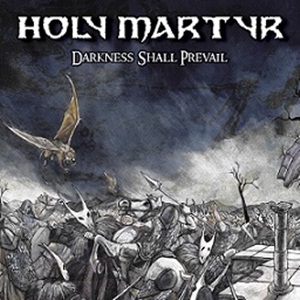 Enduring twenty plus years together in an epic heavy metal style forging a path of cult-appeal deserves kudos for sticking to what appeals to your head and heart as musicians. Italian band Holy Martyr display their commitment to the cause on Darkness Shall Prevail, their fourth album and first in six years. Gaining two new members in that downtime with drummer Stefano Lepidi and second guitarist Paolo Roberto Simoni, the quintet gravitates towards riffing and tempos that are simple yet effective: doomy and powerful, with melodies, riffs and structures that could easily take people back to ancient times. It’s also not surprising that past records have tackled equally historical/mythological engaging content from Greek battles to Ancient Roman soldiers and even Japanese culture and bloody samurais.

This time around, Holy Martyr write and perform a ten-track conceptual effort based on J.R.R. Tolkien’s mythological world he created – subject matter brought to prominence for a great deal of metal followers during most of Blind Guardian’s career. The guitar tandem harmonies have that NWOBHM legacy churning – Di’anno-era Maiden more so than the early Dickinson days- to make “Heroic Deeds” and thunderous closer “Born of Hope” relevant on the axe side enough for crowd engagement. Minor chords ring out to the sky against a plodding, doom tempo, making conquering inevitable, the soundtrack of which “Dol Guldur” brings smiles to people familiar with the catalog of Cirith Ungol and Manilla Road. Spicing things up the group use choir supplementation, acoustic guitar additions, or shorter instrumental segments to buffer the naturally longer compositions Holy Martyr adore – usually clocking in around six-minutes plus.

The struggle for full on engagement lies in the wild range of singer Alessandro Mereu. He has a mid-range warble and tendency to pitch things up a couple octaves beyond his natural register, making it painful or cringe-worthy at times (the pronunciation of ‘Here – I – Deeds’ for “Heroic Deeds” difficult to digest). The best epic metal to these ears has a presence on the vocal front that is different from most styles – but also knows the limitations and doesn’t stray far from them. And seeing ‘grandiloquent’ in the bio sheet to describe Darkness Shall Prevail had this scribe reaching for a dictionary (a lofty or bombastic style, manner, or quality courtesy of Merriam-Webster).

Overall though, Holy Martyr ride their influences too much this deep in the game to really attain anything beyond small club dates or niche festival appeal.