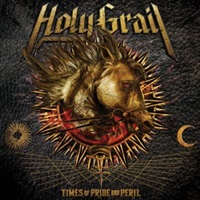 Traditional metal and its power/speed offshoots will never die. It may slink back into the underground during tough times (the first half of the 1990’s especially when alternative/grunge and extreme metal took off) but there will always be rivet heads and earthlings that champion twin guitar harmonies, soaring melodic vocals, steady drum tempos, and passionate hooks to gallop into battle for glory. Pasadena, California’s Holy Grail represent the newer American breed in the genre, taking the best aspects of the past while keeping their music and production a touch more aggressive to appeal to a modern audience.

Continuing their triennial album cycle, Times of Pride and Peril as the third studio full-length connects on more of a versatile hook and harmony basis. Anyone can be fast and shred if given talent and chops – in the end it’s those melodic sections that stun and astound, and guitarist Eli Santana with fellow axe man Alex Lee deliver a boatload of those moments on “Those Who Will Remain” and the up-tempo crusher “Descent into the Maelstrom”. The almost ten-minute “Black Lotus” actually opens on a fiery power basis, as James-Paul Luna reaches for the highest notes in his multi-octave larynx a la old Halford – transforming around the mid-way point through a potent Blake Mount bass riff to build into this longer instrumental section that is part progressive and all power, even neo-classical in flourishes before the clean meets doomy ending turns the arrangement over again.

Front-loading the record with material that has that anthem nature to leap from studio to stage makes “Waste Them All Away” and the double bass heavy hitter “Sudden Death” early favorites – but don’t discount the harmony thunder and traditional racing aspects that give “No More Heroes” devil’s horn salutes. Imagine if you will taking the speed factor down a touch from Exmortus, and injecting a little more classic Priest/Maiden harmonies and that’s where Holy Grail sits in terms of what they accomplish in their songwriting – while Luna’s vocals are pitch perfect. Add in a multi-layered cover that screams ‘metal’ with symbols, spikes, webs, and animals, and you have the total package.

Times of Pride and Peril keeps the Holy Grail sound moving along just fine, hopefully opening up horizons for larger touring ventures and giving the new generation an aural product they can hold up as their Holy Diver, Balls to the Wall, or Painkiller.