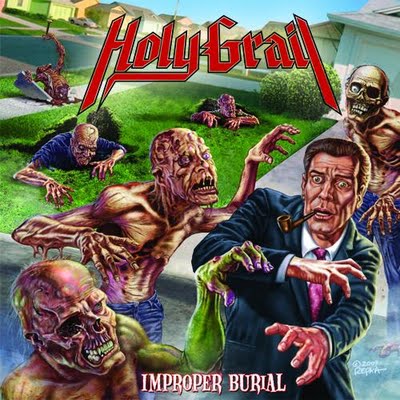 First it was the retro thrash wave, now it’s the retro, retro metal wave. You gotta love metal: it just keeps on aping itself. When the talent pool is so diluted and the number of veritable, reliable acts is far outnumbered by uncreative, trend jumping retreads, you’ll end up producing bands

like Holy Grail, who serve no other purpose than to attempt to resurrect the ghost of 80’s metal.

, the Improper Burial EP is designed to set up the band’s forthcoming Prosthetic debut, Crisis In Utopia. Two originals are included, “Fight To Kill” and “Immortal Man,” both of which demonstrate Holy Grail’s penchant for fist-pumping riffs, speedy tempos and the rafter-scraping vocals of James Paul Luna, who recently did time in fellow retro metallers White Wizzard. Actually, 3/5’s of Holy Grail appeared on WW’s High Speed GTO release from last year. What, they wanted to start a band with a fresh new sound or something?

Two covers, Judas Priest’s “Exciter” and Accept’s “Fast As A Shark” round out the EP, with “Exciter” getting some new twists in the guitar

department. A smart move, just like releasing this EP to the world before the proper LP hits. Where Crisis In Utopia will put Holy Grail is up for debate, although we wouldn’t be the slightest bit surprised to see them slammed up against the aforementioned White Wizzard, dependable Cauldron, and steady Icarus Witch. Let the rehashing begin! Again!