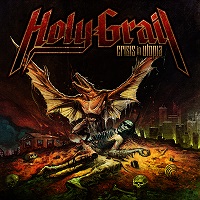 California consistently produces a boatload of musicians hoping to turn the music industry upside-down and carry their songwriting and performance wares to all sides of the globe. Holy Grail from Pasadena already have buzz-worthy street credibility due to three of their members (vocalist James Luna, guitarist James J LaRue and drummer Tyler Meahl) leaving another young traditional act, White Wizzard. Signing on the strength of a 7” single and an EP, their debut album Crisis In Utopia features a traditional meets speed/slightly modern slant that should help them create their own niche in an overcrowd throwback subgenre.

Those of you who look for air guitar shred motions will have a limitless buffet to feast your ears upon, be it the back and forth solo tradeoffs or the dual harmonic action that come up in spades on tracks like “My Last Attack” or the title cut. Second guitarist Eli Santana also provides complementary vocal support, giving the melodies more fullness in the mid-range during heavier, diverse material like “The Blackest Night” with its stair step chord ringing or “Chase the Wind” with Tad Morose-meets-“Children Of The Grave”/modern power groove appeal.

James Luna has one of those voices that I’m sure will appease many and disappoint others – he’s not going to hit the Halford or Dickinson highs, and prefers to inject more of a conventional hard rock personal swagger to his lyrics and melodies. My favorite songs tend to be the ones where the rhythms go for a distinct late 70’s effect, synthesizing Rainbow and UFO into more of a 2010 approach such as “Requiem” with Tyler’s instinctive double bass/ snare half time groove mechanics or the bluesy swing swagger of “Call Of Valhalla.”

Exposing themselves to the right cross-section of fans will be crucial to Holy Grail’s long term plan, as I think Crisis In Utopia has legs for more than the old school punters.