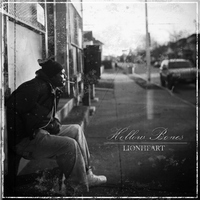 Usually when the word metalcore is used, it leaves a dirty feeling. The over-saturation of that occurred after bands like Killswitch Engage, Shadows Fall, and Unearth ‘broke through’ resulted in much disdain for the style, particularly the more melodic varieties (as with anything that becomes more popular within the metal realm). Even today, it’s quite hit or miss but New York’s Hollow Bones have managed to take a familiar feeling and make it into something that works.

Despite a more luke-warm opening, things really begin to pick up with “Lionheart, Execution.” It’s at this point that the band pulls out their secret weapon – guitarist Sharon Malfesi’s vocals. The more melodic and atmospheric material that the band hints at on the two previous tracks is given an extra kick in the pants with Malfesi lending some soaring vocals to the mix. They never lean on them to carry the songs from that point forward, but more to add a little something more to the mix. Whether it’s a break from the abrasion in a song like “Drytooth” or a punchy chorus like “Lionheart, Sonder,” they are always a welcome addition. Also welcome is the addition of more post-hardcore driven atmosphere, with “I Watched the Snow Fall and Bury Your Bones,” which adds to the more standard chugging riffs. There’s also some heavy moments, as in “A Murder of Crows,” which gives some added dynamic and never resorts to cheap breakdowns. While there are some breakdowns, they build them appropriately and deliver a sense of urgency to them.

Lionheart takes the usual melodic metalcore playbook and turns it into something that has some solid legs to stand on. It’s not completely revolutionary, but the tweaking present, such as the strong clean vocals, emphasis on outside the box melodies, and occasional deluge of heaviness give more than enough reason for genre fans to check it out.