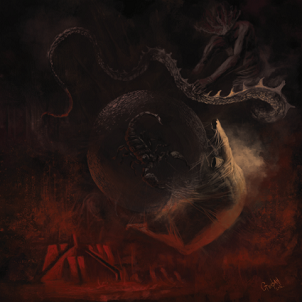 Whenever a band takes 12 years to release a second album, the first question is almost always “What have you been up to? And why such the delay?” Finland’s Hoath have a legitimate excuse. Their two main conspirators (Shatraug and vHolm) have been spending their non-Hoath time with notable outfits like Horna, Nightbringer, Vordr, thus putting Hoath on the back-burner. In the dozen years since they released their Codex II: Kether album (Codex I: I.R.E. served as their demo), a lot has changed in the metal underground, but playing necro, unyielding death metal has not gone out of style, something Hoath tries to play catch-up on Codex III: Crown of the Mind.

This is the sort of “production over execution” kind of death metal, where a normalized, relatively clean production job would essentially spoil the old-school broth. It’s all meant to be dingy and raw; or uncompromising, if you will, so the caustic ruckus kicked around on the clangy “Behold the Soul (Profane Research)” or the rudimentary pillage found on “Of Virgin Moon and Serpent” cross only rudimentary death metal levels, devoid of dynamics and interesting riffs. (Many of these feel swiped from the Sarcofago, Hellhammer, early Venom playbook, to be frank.)

The unyielding simplicity and blunt force of the 13 songs found on Codex III: Crown of the Mind doesn’t inspire feelings of yore, nor does it place the Finns in line with the current onslaught of ‘80s-hugging bands. It also begs the question if Hoath had put this out six years earlier, would it have more of an effect? Eh, that’s somewhat arbitrary. Pass on this one.