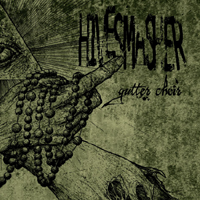 What d-beat punk/metal needs right now is more death metal. No, not retro death metal, because that would mean everyone with knowledge limited to Left Hand Path would join the fun. We mean death metal, as in moderately technical death metal. You know: bands that can play, bust out the occasional solo, etc. Frankly, any crusty dude wearing an Amebix shirt with a black jean jacket can do what basically the entire Southern Lord Records roster is doing right now, which is simplistic d-beat metal. Some technicality would be the cure for ails a severely, severely bloated style, that’s for sure.

A six-piece from Massachusetts, Hivesmasher play a brand of coarse, prickly punk death metal, melding the aforementioned technical portions into a combustible 17 song effort under the banner of Gutter Choir. The song titles are, for the most part a dead giveaway as to how matters will proceed, with gems coming in the form of “Can of Awesometism,” “Send Me to Satan,” and perhaps the most apt title of them all: “No Structure, Total Violence.”

The band’s calling card should be the “No Structure, Total Violence” tag, for it fits the bill perfectly. There’s an ample amount of piledriving d-beat action that rolls like a Stockholm tank, while singer Aaron sounds as if he’s just been released from the psych ward, as heard on perhaps his most deranged moment, “Shooting at Apparitions,” which is a delightful 31-second run of out-of-control grind. And yes, there are lively technical bits breathing light into the compositions, sounding like a more unhinged Cryptopsy.

Kudos to The Red Chord’s Guy Kozowyk for picking Hivesmasher up for his Blackmarket Activities label, as they’re easily one of the best additions to his stable in recent memory. Gutter Choir is a worthy concoction of controlled destruction, and certainly a breath of fresh air. Lord knows we need it around the various stinky dudes that comprise of d-beat core.