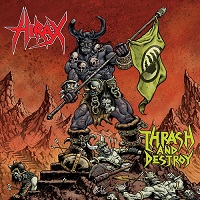 One of the few bands that were still plugging thrash before the current revitalization, Los Angeles-based Hirax are rightfully reaping the rewards of this second wave. While they never cracked the upper-tier of thrash, Katon De Pena and co. have garnered a primarily-European following, one that is on full display for Thrash and Destroy.

Shot during the 2007 installment of the Keep It True Festival in Germany, the band runs through 18 shards of thrash to an adoring gymnasium where the festival was held. Professionally shot and recorded with clear audio (given the surroundings), Thrash and Destroy also features a complimentary audio CD recorded during the Metal Forces Night on the same festival run.

De Pena’s vocals are certainly an acquired taste and at times, he overwhelms the music, which is at best marginally good. What De Pena lacks in vocal ability, he makes up for in stage presence. Commanding and stalking the stage, De Pena even goes as far as to stop “Hostile Territory” in mid-song to halt crowd fighting. The frontman remained down front and in the face of the crowd-surfacing throng, which no doubt enjoyed the face-to-face contact.

The one-speed tempo of Hirax’s music is well-worn for the live arena, as punishing songs like “Blind Faith,” the classic “Bombs of Death” and “El Diablo Negro” are certainly mosh-worthy, which is probably what the band intended from the onset.

Old-school thrash, when performed with a certain element of zest, passion, and zeal, is hard to fuck up and Hirax are without question, one of the forerunners of the style. De Pena himself is veritable thrash sage, a true champion of the scene, thus, making Hirax all the more relevant in a time where being relevant in thrash is more about cashing in than being true to oneself.