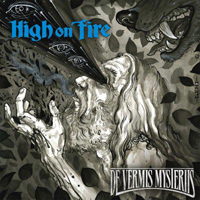 Responsible for the creation of a lot of crappy bands, High on Fire have at least the good sense to retain their relevancy after breakout albums like Blessed Black Wings and Death Is This Communion. They’re still a bit cult and artsy, without losing any of their sweaty and dirt-caked façade. And frankly, listening to an album like De Vermis Mysteriis (“Mysteries of the Worm”), you can see where lesser-minded bands go to get their riffs…they go right to Matt Pike. Surely De Vermis Mysteriis will be harvested long after its release.

It doesn’t take a rocket surgeon to figure out where the knobs on Pike’s amp are – they’re on 10, and probably would be 11 or any other cliché we could come up with in regard to high amounts of distortion. Really, Pike’s guitar is the show here; the rhythm section of bassist Jeff Matz and drummer Des Kensel are just along for the ride, around to make sure the bottom doesn’t drop off and Pike doesn’t head back to his bore-a-thon Sleep days. Opener “Serums of Liao” makes sure of that, provoking a monster rumble and plunging tempo that effectively opens up the rest of the album.

One would be best advised to step aside when “Bloody Knuckles” comes barreling down the street, as the seismic riff-roar Pike unleashes around the 2:15 is a high-water mark for the album. The militaristic opening of “Fertile Green” segues into a thrash-meets-Melvins moment, just with more fuel, and the buzzing “Spiritual Rights” is another one of those jams that makes the trio sound more imposing than their formation would suggest. Rounding out things is “Warhorn,” where Pike gets a rare (albeit brief) moment to shine as a vocalist before his guitars cave in the song in typical HOF fashion.

Packing more power than its Snakes of the Divine predecessor, De Vermis Mysteriis is one of those albums a band atop its subgenre makes to reaffirm its status. There’s little doubt as to who the current kings of explosive stoner metal…a tag that couldn’t be a bigger oxymoron, but couldn’t be more fitting.