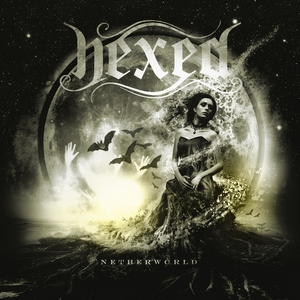 After generating some solid praise after their Exhaling Life EP last year, Hexed found their way over to ViciSolum Productions for the release of their first full-length, Netherworld. The Swedish act play a modern version of heavy metal, one that’s hard to ignore given the strength of their riffing and Tina Gunnarsson’s vocal performance.

The sound of Hexed feels just like pure heavy metal. While the guitars have a thick and modern crunch, and there’s some synth to spice things up, it’s a pleasantly straight-ahead approach with no frills or added baggage. Thus, Netherworld has to rely on one major element to get them through, and that’s great songwriting. Thankfully, Hexed is all over this, with songs that are immediate enough to grab you on the first listen yet keep you coming back for more. They don’t hold back on the heavy riffing, and songs like “Oceans” have some gigantic sound to them. Some seriously headbangable stuff awaits with nearly every track, with effective melodies and leads woven in (“Lightyears”) to ensure your attention is always at its peak. As noted already, Tina Gunnarsson takes the lead vocal for most of the album, with guitarist Stellan Gunnarsson taking the male vocals to provide an occasional yet effective counterpart, along with some guest vocalists such as Ronny Hemlin of Tad Morose (“Remake My Soul”). Tina is charged with providing the emotional underbelly to the darker riffage, which is gracefully done. Her vocals are dominating when necessary, and she proves quite capable of becoming a name to be reckoned with in the genre. “Forsaken” and “Stars” are just two examples of her range, all done without succumbing to ‘ballad fever’ as many other bands might.

Hexed seem set on elevating their status once again with a thoroughly enjoyable performance on Netherworld. It’s a comfortable listen for modern metal fans, but their command over the nuances and knowledge of what works and what doesn’t is commendable. Netherworld is bound to get people talking with plenty of enthusiasm as word gets around.