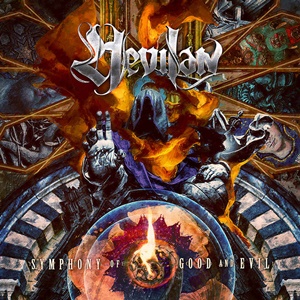 Containing ex-Warrel Dane guitarist Johnny Moraes in their ranks, Brazilian quartet Hevilan started in 2005, releasing a demo the following year with Blinded Faith. Many years later The End of Time debut album hit the streets, first independently in 2013 but gaining a Massacre Records release a couple of years later. They gained the chance to support artists like Masterplan and Edu Falaschi setting the stage for this follow-up Symphony of Good and Evil. A conceptual record about the conflict between good and evil within the human being, the songwriting and performances align with a heavy metal base that is slightly progressive and symphonic, containing numerous influences from North America and Europe along with a bit of their own homegrown heroes Angra.

While much of this material centers around the sophisticated rhythms and catchy accents of axe master Johnny Moraes, he has capable strong support from his fellow bandmates to drive home the energy and powerful vocal melodies. Most will notice the multi-layered grit and low to high octane range of Alex Pasquale – mirroring a mixture of Russell Allen and Rick Altzi on the instantly melodic progressive highlight “Great Battle” and shifting gears in a breezy, late 80’s manner for the acoustic-infused “Waiting for the Right Time”. Drummer Rafael Dyszy flexes his speed chops and bassist Biek Yohaitus also showcases some Hibria/Angra low end heroics during “Here I Am”, placing equal emphasis on virtuoso angles but in a shorter 3:17 timeframe where the main musical components are rather modern and staccato/groove-based. The four-part title track concludes the proceedings – everything from vocal choirs a la Leaves Eyes/Therion to bold symphonic orchestration accompany the regular electric instrumentation, of which “Part II Dark Ages” dazzles in progressive guitar, bass, drum maneuvers a la Angra, Dream Theater or Symphony X that should keep all musician-minded folks buzzing. The vibrant cover from Gustavo Sazes (Firewind, Kamelot) allows insight into this tantalizing music you will hear – keeping the emphasis on the metal side of things, never letting the proceedings get too over the top or bombastic.

Hevilan isn’t exactly pinning the originality barometer at this stage in their career. However, the ability to take a few diverse sub-genres and seamlessly develop solid songwriting mechanics next to exciting musicianship gives everyone strong hope for a solid career to keep tabs on.