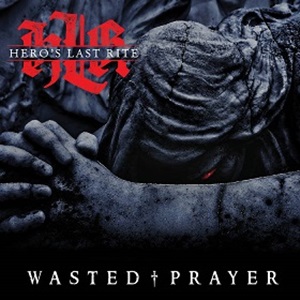 The Canadian thrash attack continues with Hero’s Last Rite – active for almost a decade with two previous albums under their belt (this scribe privy to the second The Mirror’s Face back in 2014), the follow up Wasted Prayer features a new bassist in Eric Godin while continuing to churn out an aggressive, rhythmic blend of material. Considering the plethora of groups tackling the genre from all sides (old school, new school, crossover, blackened/death) – Hero’s Last Rite twists things up by injecting a couple of different aspects in the riffing, varied tempos, bass spotlights here and there- as well as a blood curdling vocal performance that makes a pissed off Phil Anselmo seem tame by comparison.

An expansion of horizons appears obvious in regards to circular, rhythmic guitar work and simpler, groove transitions – the type you may hear from Machine Head or Lamb of God during the spitfire verses or chorus of “Engage the Weak” while Eric gets some low buzz prominent spotlight during the instrumental breakdown section. At other times, Gojira-like speed picking mechanics take ahold against a stunted tempo change – bringing “Devilfinger” to the forefront as the main hook and blitzkrieg blast shifts keep the adrenaline level top shelf. The thick guitar sound and counterpoint offerings from Tim Gorman and Mike Davidson draw similarities to 90’s era Nevermore and latter period Exodus for sure – supplying solid, muscular heftiness to their choices. It’s hard not to be envisioning swirling masses of bodies when airing “The Unforgiving Disease” or swinging, swagger-filled closer “Human” based on the duo’s fleet fingers and equally adept tempo changes and fill ethics from Dan Rogers.

Steve McDonald probably uses the caustic, spitfire scream approach on an 90/10 basis versus his calmer, morose clean melodies – which occasionally can reach nails on the chalkboard irritation, but it’s minimal for an eight song, under 40 minute record. Those who tire of pristine, Pro Tools to the max production jobs where you wonder what is human and what is computerized will welcome the in your face tones – giving the snare a proper snap while not burying the bass in the proceedings. Hero’s Last Rite appeal best to the blue collar metal layman – someone unafraid of a band that may have thrash as a base, but goes off into groove, death, and semi-modern contexts if necessary to flesh out the song. As such, Wasted Prayer captures the angst and pissed off characteristics that keep the movement thriving.