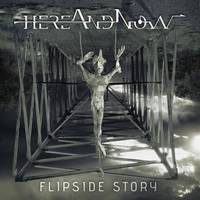 Bulgaria’s hereAndNow have a strange punctuation flow, if it wasn’t apparent from the way that their band name is spelled. Not sure if there’s some deeper meaning behind it, but when all the song titles follow this same pattern (“forsakeTheSick,” “ruinsOfThePast,” for example) it does seem to beg further investigation. It certainly has my spellcheck in a fluster. That aside, this is more melodically inclined metal that skirts between melodic death metal, groove, and metalcore – if that’s your bag.

Unquestionably modern in tone, it doesn’t take long to get the jist of what hereAndNow is doing on Flipside Story. The guitars offer heavy grooves, mid-tempo melodic death riffing, and the occasional swing into metalcore territory (both vocally and musically). While there’s nothing wrong in particular with the band’s approach to the genre-mashing, nothing every really sticks upon the release finishing up. While you are listening, galloping moments of “rebuildAndDestroy” carry the necessary groove and catchy licks, but it’s virtually indistinguishable from the legions of other bands that are pushing similar territory. The song does later go into some electronics, but this too is quickly becoming an area bands are introducing as well. On the plus side, “theHydra” uses some female vocals to change things up, “spaceElevator” begins with an odd little ‘elevator music,’ and a few tracks rachet up the speed and pull off some solid solos (“chooseASide”).

In a crowded field, it’s the little things that make the difference. Unfortunately, Flipside Story doesn’t have enough of them to keep the listener around for multiple go-rounds. Some expansion into more uncharted waters (such as the two moments cited above) could help matters, as the musicianship is as strong as one could expect. It’s just a matter of the band finding their place in the crowd.