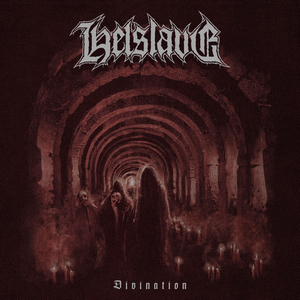 It’s sometimes mentioned here at DR that an EP is an excellent way to consume more extreme material with its condensed length. It’s also a nice starter for some acts, or a way to keep eyes focused on the band in between full-lengths. It’s been two years since Helslave’s An Endless Path, so consider this one a probable case of the latter. But a sure-fire way to garner some attention based on it’s strengths.

Four songs in about 16-minutes, Divination hits hard and fast – leaving you with no choice but to start over and listen again. But that is the key to the whole process. You want to listen to it again after it ends. This is Swedish death metal through and through, so you can already imagine what it sounds like, but Helslave has it boiled down to the essentials. Just the right combination of heaviness and melody, faster songs like “Summoning the Eternal Eclipse” will have you shaking your fist along with the insidious riffing and the album’s slower groove monster “The Spawn of Astraroth” is sure to get heads banging in an instant. The melodies are potent, but know when to vacate to let the ferocity reign free (“Lord of Lies”). The vocals hit just the right frequency and setting within the framework, and even though they fit what you’d expect, like the rest of the music, there’s a pleasing tone that is hard to escape. Likewise, the production is spot-on and keeps the band from sounding too retro and gives it the crunch and power needed to be completely devastating.

Some tend to shrug off Swedish death metal because of the volume of it out there, but Helslave have a tremendous grasp of it. Hard not to get into it after just one listen, and even harder to not listen just once more when it ends due to the shorter runtime.