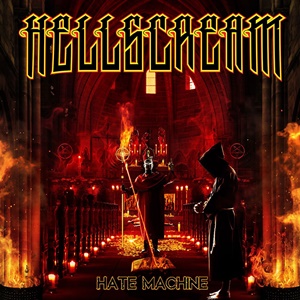 Squeezing in recording/songwriting when they can, Hellscream consists of vocalist Norman Skinner (Imagika, Niviane) and guitarist Dave Garcia (Cage, The Three Tremors) – releasing their second full-length for Hate Machine after their debut Made Immortal hit the streets in 2013. Given the duo’s already extensive comfort in the traditional, power, and thrash realms, it’s apparent that they wish to continue developing a US metal platform that exploits their love for these sub-genres – and that’s what you’ll get throughout these twelve tracks.

The record contains a wide array of textures as the best traditional/power-oriented metal efforts should. Atmospheric/clean movements sweep into these double kick, heads down electrified periods of intense madness within “Zero Recall” where supplemental narrative themes provide psychological context on the lyrical theme, while opener “There Will Be Blood” contains call to arms guitar harmonies and a straightforward metal charge in line with Iced Earth or early 90’s Judas Priest, Norman executing some high screams and shrieks plus evil mid-range melodies. Occasionally adding that 70’s doom touch for the beginning of “Hate Machine” allows the subsequent thrash-oriented riffs/tempos a chance to build the emotional intensity, the vocals a mix of quiet reflection and punishing, Anselmo-esque rage. Gun trigger sound effects punctuate key moments in “Payback!”, ‘vengeance will be mine’ ringing truth to the sky as Dave peels off some sinister licks and speedy rhythms. As solid as the main hooks and performances are, there appears to be a bit of a mechanical tone to the drumming portion of Hate Machine that could make it a tougher sell for those ardent traditional/power/thrash heads who want a snappy snare and kick drums that punch you in the gut. It may not hurt the circular guitar motions throughout “Weight of the World”, but the concluding “Generation Kill” suffers from an almost typewriter-like tempo that swirls in a sea of monotony.

It has been six years between albums – and most people who will check out Hellscream probably are most familiar with Norman and Dave’s main body of work within metal. As such, Hate Machine is solid in it’s traditional power songwriting – nothing earth shattering, but definitely worth a listen or two if you’ve dug Cage, Niviane, or Imagika in your lifetime.