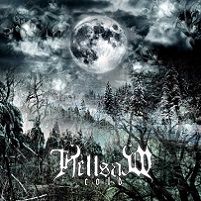 The name “Hellsaw” won’t strike fear into anyone and with song titles like “Psycho Pastor” and “I Saw Hell,” one could almost write this off as slap-stick black metal. Yet it’s not and Cold is more than meets the eye; the combo of grim, frost-bitten BM and the rockin’ groove of modern Satyricon (see “The Black Death”). It’s this tried-and-true approach that when done properly, usually provides results. On Cold, there are plenty of them.

Right off the bat, these Austrians (comprising of vocalist Aries, guitarists Isiul and Malthus, bassist Desderoth, and drummer Svart) establishes its ground onCold with atmospheric riffing (acoustic guitars to boot) taking charge on “A Suicide Journey.” “The Black Death” is along those lines, recalling the early and present works of Satryicon, while “Cold Aeon” features the most frenzied riff interval on the album at the 1:51 mark.

Hellsaw doesn’t do anything inventive or out of the realms of black metal past and present, which is why it didn’t score higher. Still, the spoken word intro of “Psycho Pastor” is one of the better moments on the album, especially as it leads into a striking melodic riff combination. Cold switches gears again as “I Saw Hell” picks up the ball on the more rock-tinged BM front and “Moonrites Diabolicum” returns to the classic BM approach established from the onset.

This jostling between black metal styles might hurt Hellsaw in the end. If they put their collective heads down and stick to one style, the results could see this troupe flourish. For now, it’s a relative mish-mash of BM stylings, which is fine; more bang for your buck…a black metal buffet, so to speak. 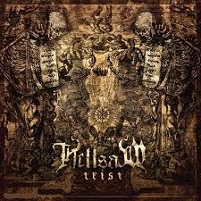