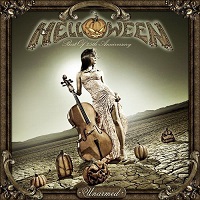 Ever the risk-takers (who can forget the ill-advised Pink Bubbles Go Apeand Chameleon albums?), Helloween, in celebration of their 25th year of existence have re-worked 11 songs

from their celebrated career. Such a milestone would usually call for a traditional best-of album or a re-recording of past classics, but Helloween doesn’t play that game, opting for a stripped-down, totally left-field approach to some of their most cherished songs. Such a risk would backfire on most bands, but not the ‘Weenies – Unarmed: Best of 25th Anniversary is magnificent.

When we reference “re-working,” this in actuality is a major overhaul. Opening track “Dr. Stein” is still the fun, peppy tale of Dr. Frankenstein, but is now complemented by trumpets and a swaying chorus. The once power metal-propelled “Where the Rain Grows” is a reflective piano ballad, while “If I Could Fly” is an acoustic-driven number that stays true to the optimistic vibe heard on the original.

), “Keeper of the Seven Keys” and “King Of a Thousand Years” and blends it into a gargantuan opus. The “Keeper of the Seven Keys” movement is especially striking, as Andy Deris is joined by a massive choir, thus augmenting the monumental chorus penned by guitarist Michael Weikath over 20 years ago. To only compound matters, “Eagle Fly Free” (which is the greatest power metal song known to man) is turned into a lush ballad, with a different vocal arrangement that while not as massive as the original, is every bit as moving.

Previous singles like “Perfect Gentlemen,” “Why?” and “Forever and One” are also included, with “Perfect Gentlemen” remaining the cavalier, care-free song it was in the first place, while “Why?” gets a jolly, rag-time treatment. Also, don’t sleep on “Fallen To Pieces,” an overlooked number from 2007’s Gambling With the Devil.

have experienced such a tumultuous existence than Helloween, so the 25-year milestone is both a testament to the band’s never-say-die attitude (and Weikath’s now steely leadership) and their vast, catalog, that save for a few missteps, is utterly mandatory. No band has meant so much to power metal, so don’t rely on Unarmed: Best of 25th Anniversary for a history lesson. Rather, this is merely another showy victory lap for the most important German metal band alongside the Scorpions.