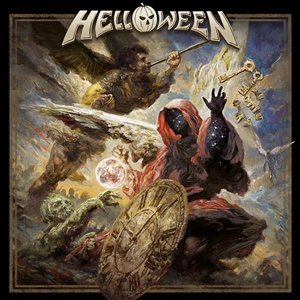 Metalheads dream, scheme, and debate lists of the past, present and future in every category imaginable. Considering the ever-evolving nature of humans, relationships, and priorities, musicians often capture a movement like lightning, strike while the iron is hot, and quickly fade away. When it comes to power metal, one of the four bands on that Mount Rushmore of influence as well as body of work has to be Helloween. After a multi-year run reunion tour with the current lineup along with vocalist Michael Kiske and guitarist/vocalist Kai Hansen from those 1980’s heydays, hope held out for a new record. And that finally has come to fruition.

The background process for this recording includes multiple engineers and producer Charlie Bauerfiend plus co-producer Dennis Ward pulling together seven musicians and accurately embracing their abilities in a natural state. It’s never easy to appease three vocalists, three guitarists, and five songwriters vying for space to deliver the best album possible. And yet through the twelve tracks encompassing sixty-seven minutes of material, Helloween illustrate that all eras of Helloween (Kai-led, Kiske-highs, and Deris-fueled) can indeed be delivered to the modern world in a palatable, invigorating manner that contains all the expected uplifting vocal harmonies, powerful/touching rhythms, exhilarating multi-guitar synchronization, progressive/aggressive rhythm section passages the faithful want from the pumpkin brigade.

“Out For the Glory” is an energetic 7:34 starter, even if the opening instrumental sequence has an obvious similarity in the note choices and drum run as Slayer’s “South of Heaven”. We get all three singers factoring into the performance, plus wiry, tantalizing power glory from Kai Hansen, Michael Weikath, and Sascha Gerstner on their respective electric axe duties and some narrative ambiance near the latter third of the arrangement. Sascha and vocalist Andi Deris develop one of the catchiest Helloween numbers in some time for “Best Time” – containing the ideal main earworm riff, support, and vocal melodies to be the “Future World” or “I Want Out” cut of the album. “Robot King” contains a bevy of shifts, Andi Deris showcasing some of his high-octane personality during the verses while the chorus is tailor-made for unison audience shout-a-long action and the double kick/guitar work again harkens back to classic Keepers saga triumphs. The closing effort “Skyfall” is a twelve-minute tour de force, Kai Hansen writing a space odyssey that puts Kiske in his upper range driver’s seat – Andi and Kai supplying the other mid-range / dwarf-like voices to put a cap on a stellar front to back effort.

Throughout the record, Helloween injects outside the box ‘metal’ influences – be it from a show tune, classic rock, or progressive / alternative perspective. That’s why favorites change by the day – and will probably allow this album to become not just the most talked about record in power metal for 2021, but in the genre overall. In an era where people may not wait on pins and needles for any upcoming record, Helloween brings this scribe back to that youthful exuberance here when you couldn’t wait to consume every note of new material – a reunion that should continue forward as these gentlemen still deserve the accolades and appreciation for the quality, detail, and performances contained within.