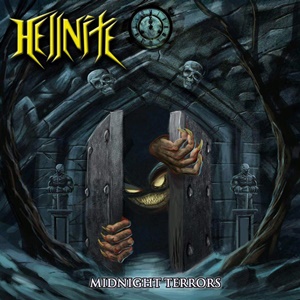 A heavy metal project born in Mexico and now residing in Canada, Hellnite started as a thrash band in 2010, releasing their Manipulator EP in 2013. Mastermind Paolo Belmar felt the need to incorporate and expand upon his influences, which range across the board through progressive, death, classic heavy metal and even hard rock nuances- so it’s evident on this follow-up full-length Midnight Terrors that listeners can expect a different, broader spectrum of material.

After a few spins, it’s clear that diversity wins supreme – many of these arrangements may start from a heavy metal platform, but there is everything from progressive guitar/ drum tempo gallops during “Beasts from the Deep”, all out thrash assaults for “Stage on Fire” as well as 80’s riffs of evil a la Mercyful Fate during the title track. Paolo plays a major role as producer, composer, guitarist, bassist and vocalist – his main delivery has an accented raspy quality, very much in line with a younger version of Ron Royce (Coroner). The guitar action is crisp and clear, continually possessing melodic traits and hooks that could easily catch metal maven attentions everywhere – one of the standouts being the exotic Iron Maiden-like activities during “Phantom Force”. A couple of major disappointments occur when it comes to the overall final product relating to the drum programming and numerous stop/start moments throughout the songs. The predictable fills and mechanized flow often mirror the music to a tee – so much so that it can flatline the mood that Hellnite is trying to achieve. Check out “Spirits Prevail” to hear weird stop/starts and ho-hum transitions that may have been cool 35 years ago, but just sound pedestrian and rehearsal-level in today’s crowded marketplace.

Despite all the requisite logo/cover art elements that should make this a winner, Midnight Terrors feels like Hellnite is stuck in a transition period as to where they want to go musically. It’s a case of buyer beware, with talent present yet not fully realized.