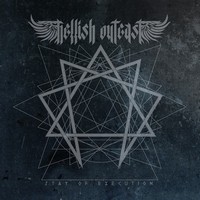 More to come on the Keep of Kalessin front when they release their new album next month, but it’s worth noting (obviously) that the band’s former singer Thebon has popped in the band in question, Norway’s Hellish Outcast. Varying accounts are out in the open as to why Thebon is no longer a member of Keep of Kalessin, including the rationale the singer fell off the face of the earth for a stretch, but ‘tis small potatoes now…

Hellish Outcast is not a black metal band, although they took it upon themselves to record at the hallowed halls of Grieghallen Studios, where just about every Norwegian black metal band worth a salt laid down their seminal works. Stay of Execution (the band’s second album) doesn’t exactly snag the glorious sounds of the 90s, but it’s the modern production job is fitting of the band’s approach, which is an odd amalgamation of death, groove, extreme, and even alternative metal. Tough one to pin done, especially with a creeping Alice in Chains influence afoot.

Mr. Thebon is afforded far more flexibility in this context in relation to his prior band, which explains the abundance of clean vocals, which as we noted above, detail some overflow from Layne Staley’s peak era. A song such as “Heresiarch” is perhaps the biggest example of Thebon’s growth as a vocalist, especially when the song drags out its ending portion in a trippy manner. Beyond that, there’s some ample oscillation between extremity (“Gods of Fear”) and dirty groove metal (“Machines”). All this makes for a varied listen, yet nothing to get carried away with.

As a Norwegian band playing such an outside-of-the-box style of metal (by that country’s standards, at least), Hellish Outcast position themselves as an extreme alternative to whatever the alternative is these days. But alas, a good chunk of the songs on Stay of Execution are too wrapped up in variables with not enough ear-catching dynamics. Points, for trying, at least.