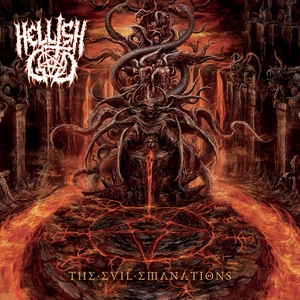 Falling into the category of sounding exactly like what their band name implies, Hellish God are nothing if not chaotic and fiery death metal. While this is the Italian act’s first full-length (following up a 2016 EP), the band is far from green – containing some established members from other bands in the extreme metal realm, including vocalist Tya (Mindful of Pripyrat, ex-Antropofagus).

Kicking it in a decidedly late ‘90s fashion, Hellish God conjure up blackened death metal that serves one sole purpose – annihilation. Unrelenting is the word of choice here, and the listener is barely given a respite from the more or less full-force assault of blastbeats, spiraling and swarming tremolo-picked riffing, and guttural vocals of the most brutal form. The usual suspects come to mind as inspiration (pick an established Polish death metal act of your choice – past or present) and at the end of merely one track (“Qlipoth”) you have a good indication of what you are getting into. Whether that is good or bad is simply a matter of taste. But understand that grooves are few and far between, as is any sort of memorable riffing that isn’t directly tied to the frenetic adrenaline rush. One can belabor the point of the benefits of a cooldown from time to time, but that’s not the ethos of what this music entails.

The Evil Emanations is meant to be a scorcher, and that’s precisely what you get. Merciless in execution, Hellish God have a deadly presence, even if it sounds a bit one-dimensional to some. But in reality, those aren’t the ones seeking out an experience such as this. Pure, visceral carnage at blazing speeds – nothing more, nothing less.