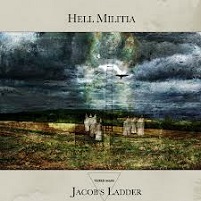 Poaching a concept from the book of Genesis is hardly new in the world of black metal. The parties lend themselves to each other and seem to have come to a sort of unwritten/unspoken mutual agreement that existence would be boring and/or futile without their respective company. It usually conjures up images of black metal dude in question, in dark chamber, bible thrust open as candles are ablaze, subsequently writing lyrics to forthcoming album in blood. Surely some black metal band has done that. As such, France’s Hell Militia have ventured into the tale of Jacob’s Ladder, the story of Patriarch Jacob and the ladder he dreams of during his flight from his brother Esau. A made-for-black-metal story, for sure.

Part of the recent (and hip) wave of French black metal bands, Hell Militia don’t have nearly the expressive or outlandish nature to their sound as Deathspell Omega or even Temple of Baal. Rather, they play traditional black metal rather straight, as in, keyboards have no functionality, and neither does melody, which isn’t a bad thing necessarily. And since there’s nothing to help garnish these tracks as anything more than second-rate, the rug is pulled out from under the band during faint, uninspiring jaunts like the opening title track and “Death Worship,” although the latter does come in as the album’s most intense number.

B-movie samples about the devil, drugs, and religion are sprinkled throughout the album’s eight-song running order, giving the more brooding and heavier passages some weight against rather generic riffs. If anything, Hell Militia comes across as a slowed-down version of Marduk, albeit without the Swedes’ ability to occasionally indoctrinate their listeners via fire-breathing doses of speed. Jacob’s Ladder simply flutters in and out of commonplace BM functionality.

Since Jacob’s Ladder and Hell Militia in general lack the basic arsenal of to compete with the high-flyers of black metal, this is a strikingly formulaic album. The movie samples are cool, and to a degree, so is the cover. Not much else.