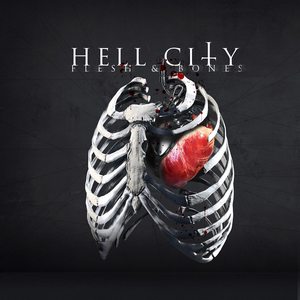 Sometimes it does boggle the mind how some bands build themselves up for years with little notice to the outside world. Hell City is a Belgian act that has a backlog of two full-lengths and an EP before entering the scope of this scribe with their Painted Bass Records release, Flesh & Bones. What’s striking is how they are able to combine styles together to create something more interesting than the straight-ahead path.

Flesh & Bones is most interesting due to the pathways and choices the band makes over the course of the album. It’s tough to really nail down the style they are doing, as they weave a web of several more familiar genres into something of slurry. At their most melodic, they capture a more modern hard rock spirit to them, such as the closing title track displays – some direct and crunchy riffing, tasteful soloing, and some quality vocals from Michelle Nivelle. At their heaviest, they portray some distinctive thrashy aggression, morphing into more screamed (and growled) vocals and frantic tempos and blastbeats at the clearly Trump-aimed “Bogus POTUS.” But the majority of the tracks fall somewhere in the middle, swinging on both sides of a more traditionally heavy metal sound and something that feels more melodic death in tone. It’s this seemingly perpetual morphing that keeps the listener on their toes, though it’s far from erratic or random. The songs pick up heaviness when necessary, or dive in for a catchy hook with the moment is right. “Playing with Fire” and “Your Darkest Hour” are fine examples of this dynamic, offering plenty of adrenaline and pure heavy metal thrills that casts a wide net.

While taking a number of genres and elements under their wing, Hell City provide an enjoyable romp that defies easy classification. Everything from the extreme to the melodic gets their due, and Flesh & Bones feels all the stronger for it.