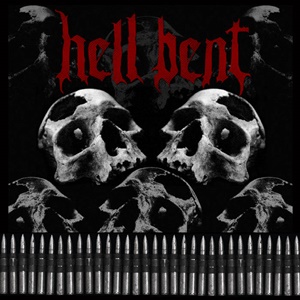 When you look at a skull and bullet adorned cover, you know right away this self-titled effort from Providence, RI act Hell Bent isn’t going to be a subtle, serene outing. Featuring a plethora of talent with local seasoning in heavy bands, it’s not surprising to take in a thrash/hardcore/crossover cocktail in swift fashion through this debut EP. Executing material in a primal, raw, and ferocious manner, this quintet slice and dice through these six cuts without any mercy, aiming squarely to wrench all the anger, angst, and aggression out of your bodies.

Acts like Discharge, S.O.D., and Far Eastern crossover thrash come to mind for major influences – the material all clocking in between 93 seconds to under three minutes, never wasting a second to crush and squeeze out all adrenaline-oriented musical fuel for the aural fire. When they choose to stop/start midway through “Canis Lupus Superion” to a mid-tempo comfort zone, you can just imagine the pits swirling about, along with some killer triplet hits from drummer Brian towards the concluding moments. The caustic scream/vent maneuvers of vocalist Aaron during “Bastard Curse of Abraham” are maniacal, while he roars in unison to the lightening quick riff paces for the follow up “Condemned to Life”. There’s some smarter transitions taking place that shift gears away from it being a pure speed blur – but rest assured, Hell Bent appear most intent on pummeling the listeners in a crossover hardcore/thrash manner that brings a lot of early memories when bands didn’t care about commercial acceptance.

It’s a tight, short affair in under 15 minutes – another case of leaving the listener wanting more, and that is a good think for Hell Bent. If you enjoy d-beat crossover thrash with punk and hardcore elements and attitude, these gentlemen serve up mighty material that gets in, gets out, and gets the job done.