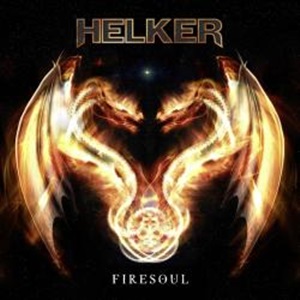 What are the chances that Argentinian heavy/power metal band Helker would be unaware that a fellow German group, on the same record label, released a record with the same album title three years prior? Apparently slim to none, as Brainstorm did their own Firesoul in 2014… nevertheless, after three-Spanish sung records, their first English record Somewhere in the Circle made an impression on the straight forward power consumers back in 2013, very solid in their Primal Fear/Judas Priest approach. Four years later we have Firesoul, continuing in that traditional vein while serving up melodies more akin to Dio than Halford for a differentiation maker.

Delivering robust rhythms and tempos that fluctuate between knock down double bass and anthem-oriented affairs, some of the influences take on a Helloween-esque twist, especially evident during the twin guitar run action during the instrumental section of the faster “For All the Eternity”. When striding into a conventional headbanger such as “The One”, the possibilities spread for Diego Valdez to shine in his Dio-esque delivery, a dramatic resonance that reaches far and wide. Piano passages permeate the power ballad “Empty Room”, the bluesy/arpeggio lead break tradeoff between Mariano Rios and Leo Aristu and buildup to breakdown dynamic textures falling in line with Whitesnake, Europe, or Mike DiMeo-era Riot. Wisely spreading out the faster songs throughout the record gives “Stay Away” a later kick ass reprieve, another leather lung charger for Diego that along with a gang-oriented call and response chorus becomes an instant favorite. The modern tribal drumming and down-tuned staccato squeals for “Break Your Chains” break up the proceedings a bit, while not straying far from the traditional path as there are plenty of twin harmonies and soaring melodies to bring things back on the Helker course.

Teaming up again with Mat Sinner as producer and Ackim Köhler as mixer/master assures Firesoul a punchy final product. Those who choose to get the digipack version get two bonus tracks including a faithful “Neon Knights” interpretation right in Diego’s singing wheelhouse. Firesoul doesn’t reinvent the Priest-ish formula well established in the 80’s through Painkiller – so much as just add a Teutonic power element to make themselves heftier.