Heliosaga – Towers in the Distance (Self Released) 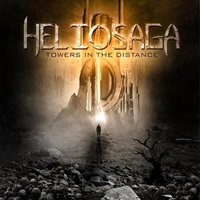 The life of an independent symphonic power metal band in the United States is not paved with lucrative endorsements, luxurious amenities, and large record contracts waiting on your doorstep. The reality is, members lose interest, recording costs are self-absorbed, and often life situations change to necessitate moving thousands of miles away to achieve your dreams. Guitarist/keyboardist Damien Villarreal and drummer Jordan Ames know this all too well – releasing demos and singles, shuffling out other guitarists, bassists, and vocalists – finally gaining ex-DesDemon vocalist Chelsea Knaack in 2012. After relocating to Isanti, Minnesota from San Antonio, Texas, the band would spend the bulk of 2014 recording Towers in the Distance, their debut 10 song full-length.

Absorbing these songs on various platforms (home stereo, car stereo, and laptop), Heliosaga possess a different nuance than most symphonic oriented bands – they actually prefer to allow the guitars to be ballsy and powerful, in line with European artists such as Firewind and Elegy along with choirs that recall Therion. It’s not to say they neglect looking at American artists too, but I think Damien and company prefer the darker, dramatic nature of say Kamelot over anything too modern a la Nevermore. Chelsea’s delivery is operatic for certain, in line with Leaves’ Eyes Liv Christine or ex-Nightwish femme fatale Tarja Turunen, but Damien’s keyboard use has chord appeal versus orchestral swaths that tend to drown out the ‘metal’ so to speak.

The fluid, driving power chords during the verses often give way to open choruses; check out the up-tempo “A Tower So Tall” or Kamelot meets Elegy oriented “Luminary” for some exciting transitions and hooks as Damien certainly knows his way around the craft of songwriting and seeking out Jacob Hansen’s talents on the mastering/ reamping end doesn’t hurt either. Jordan’s opening drum salvo for another favorite “Lost” has a Tommy Aldridge meets Jorg Michael spirit. The band can also delve into older terrain, reaching back to Dio-laden Rainbow for “Edenscar” or symphonic epic territory on the 9 minute plus closer “All Souls”, featuring acoustic guitars, all areas of Chelsea’s operatic note holding and dramatic restraint during the verses- and a killer extended instrumental section half way through that proves Damien is more than a neo-classical shredder, he can really build a lead break like the best in the business.

At times I would have preferred Chelsea to maybe vary the operatic tone, as there are times where less could have been so much more (“Hunter’s Moon” comes first to mind), but I believe Heliosaga is onto something with their ‘more power to symphonic keyboards’ style. As they settle in and seek out a permanent second guitarist and bassist, the future looks bright for these musicians.