Heir Apparent – The View from Below (No Remorse Records) 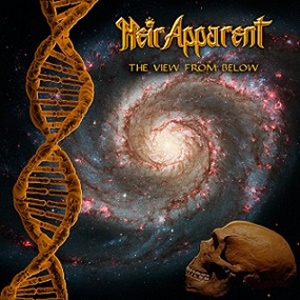 Cult favorites for their US melodic power/progressive metal style, Heir Apparent had an impact on the underground during their first 1980’s run. Graceful Inheritance is a legendary record in many European markets (Germany and Greece especially), while the follow up One Small Voice on Metal Blade aided their cause stateside. Compilations and press inquiries plus reunion shows have kept the name alive – finally allowing for this third studio album to hit the streets. The quintet today includes three of the main players during the 80’s in guitarist Terry Gorle, drummer Ray Schwartz, and bassist Derek Peace – rounded out with keyboardist Op Sakiya and latest singer Will Shaw. Unlike many veterans who seek to ‘update’ their style this many years out of the game, Heir Apparent stick to their established wheelhouse and as a result shouldn’t have any problem picking up where they left off.

If you know much about the Northwestern US metal scene of the 1980’s, there were a number of bands that developed a sound that combined the burgeoning Maiden/Priest heaviness with a more power/ progressive tact – Queensrÿche of course being the breakout act. Musically this band may not set the scene ablaze with flashy speed or intricacy – they prefer instead to embellish and enhance through stellar finesse and tastefulness. Will has a soaring range – able to reach the heavens while also being smooth and gritty if necessary, best exemplified early on for “The Door”, making me think of Mike Howe, Rob Halford, and Geoff Tate in his early 80’s prime. Alliteration comes into play for “Synthetic Lies”, ‘allegorical, architectural, anomalies’ a tongue twister delivered at quieter, almost tranquil paces, the clean guitar strumming and minor effects giving the song that progressive ambiance to be another standout. The band appears unafraid to have a quick hitting number like “Savior” at 2:26 stand toe to toe with a seven-minute epic like “Further and Father” – the former featuring nifty bass play from Derek while the latter showcases the depth of Terry’s guitar mastery from clean to electric delivery.

If there’s one area this scribe felt a touch disappointed in, it relates to the production values – there’s a distant quality to many of the tones that make this sound more old-school than truly necessary, where the drums (outside of the snare) and some of the keyboards sit a bit in the shadows. Outside of that, Heir Apparent hasn’t lost a beat in releasing another melodic progressive metal benchmark, very in tune with their values and stellar in a realm that doesn’t have many stand out records these days.