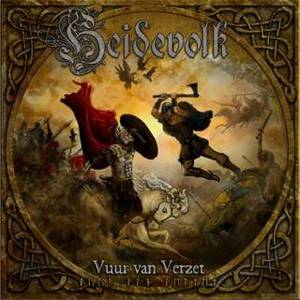 The Heidevolk ship has been sailing through increasingly stormy waters over the past few years. First, before their last album, Velua, they lost original vocalist Joris Boghtdrincker. But they continued along – now with Vuur van Verzet, they have also lost vocalist Mark Splintervuyscht and guitarist Reamon Bomenbreker. With so many changes, it’s ultimately surprising to see that Heidevolk have managed to come out with more or less ‘business as usual.’

Still completely tied to their niche of vocal harmonies, the increasingly heavier instrumentation has been where the band has attempted to mix things up with the last few releases. To that end, nothing has really changed for this release. Those who have followed the band in recent years are bound to hear more of the same – some glorious vocal harmonies (admirable that they are still strong given the recent line-up changes) set atop some folk/Viking metal riffage, some of which borders on melodeath at times. “Britannia” and “Tiwaz” are both tastefully upbeat and epic sounding tracks that define what the band has been going for, not to mention the true highlight “Gungnir,” which may end up being one of their strongest cuts to date – a fantastic combination of soaring vocals and some grand riffs/keys that will have you wanting to raise your fist along with them. If there’s one misstep, it’s in the production, which takes their strongest element (the vocals, of course) and buries them lower into the overall mix – it’s more evident on the first few tracks, which never really gain some of the traction they could have, up until the aforementioned “Britannia.”

Overcoming yet more line-up changes following Velua, Heidevolk still manage to produce an enjoyable, yet ultimately familiar, offering with Vuur van Verzet. It’s a logical decision to try to keep things moving in the same direction with such personnel changes. Hopefully they will land some much needed stability and be able to continue their progression next time around.