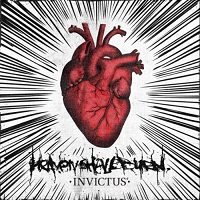 Consistency is something that a great deal of bands lack. Whether it’s a drastic change of style that goes for the worse to complete stagnation, it sadly happens often these days. One such exception, however, is Germany’s Heaven Shall Burn. Their pummeling assault of pure power has been further refined with every release. Previous release Iconoclast displayed all of the band’s trademark brutality with a vigor of which few attain. Said album was the first in a string of connected releases (the second being their recent DVD), with Invictus being the third, all having a theme of highlighting offbeat historical icons.

The introduction is very similar to those in the last few albums, which somberly sets the table with piano and violin pieces. As with the last few introductions, it was created by Ólafur Arnalds, an Icelandic composer. It definitely acts as a precursor to the coming onslaught, and does so very well.

The first song, “The Omen,” is a muscular track that never lets up with heavier than heavy guitars and the trademark raging vocals that make the band one of the best of what they do. This is very much an ongoing theme throughout, and is certainly a Heaven Shall Burn trademark that is a key to their sound. A few tracks, such as the blistering “Combat,” show a subtle use of an array of electronic sounds and beats, which suit extremely well. They add a short breather to the wall of heavy riffing and pulsating dream beats that add a diversity that does the album well.

“The Lie You Bleed For” is another standout that adds some mid-paced lead sections that add a haunting aura that draws the listener into a deep sonic bliss. Again, another showing of some diversity that certainly is a positive. Other highlights include “Buried in Forgotten Grounds,” “Against Bridge Burners,” and “Given In Death,” which features a stunning duet with lead vocalist Marcus Bischoff and Sabine Weiner of Deadlock.

Production duties are manned by Tue Madsen, somebody the band is awfully familiar with. This works in the band’s favor, as the sound quality is top notch and emphasizes the power of the band’s compositions. Invictus follows upIconoclast perfectly, representing a natural progression in the band’s music. They’re not reinventing the wheel, but they’re also fine-tuning it. The varied use of melody in the album works flawlessly, as well as the expanded electronic experimentation. There are some differences that keep everything fresh, but it’s all very Heaven Shall Burn in delivery and song structure.

Fans of Heaven Shall Burn should know what to expect by now. Never once has the band released even an average album, and this delightful inclination certainly continues with Invictus. There’s nothing to really pick on, as the performance from everybody in the band is tight as can be, and the songwriting is equally varied and loaded with gusto. This is a unit that is on top of it’s game and is showing no signs of doing anything but continue to be one of the top – yet most underrated – metal bands today. This should definitely be a candidate for year-end lists that should be checked out. Current fans should no doubt enjoy this, and if you’re new to these guys, where have you been?