Heavatar – Opus I – All My Kingdoms (Napalm Records) 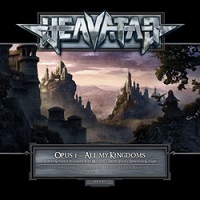 The Blind Guardian Choir Company – Billy King, Rolf Köhler, Olaf Senkbeil, Thomas Hackmann – have created many a magic moment in the annals of epic power metal. Too many to count, to be frank. To sit and type all of the rousing, awe-inspiring choruses this quartet is responsible for would probably warrant an article altogether, but they’ve taken up some part-time duty on the debut offering from Heavatar, Opus I – All My Kingdoms. As expected, the gang lifts this album rightly into the brash, sing-a-long stratosphere…and makes Dead Rhetoric wonder if they’re available for birthday parties or appearances during any one of life’s more “momentous” occasions.

Created by Van Canto main dude Stefan Schmidt, Heavatar is designed to be a getaway vehicle from Van Canto’s cappella metal offerings. Since Schmidt has already proven to be rather adept at crafting songs of the cinematic nature, it is no issue for him to round up some well-crafted, mid-90’s-like epic power metal jaunts here. The choral layering on opener “Replica” is just the first sign of things to come. Schmidt uses The Choir Company wisely, letting the group enter the fray at just the right time – just check out the title track, where the group runs alongside Schmidt’s very German delivery.

Down the line – “Luna, Luna!” the quickened “Elysium at Dawn,” and closer “To the Metal” make for equally dramatic and mead-clanking numbers. It would be a total stretch to say Schmidt has channeled the spirit of the Guardians of the Blind on Opus I – All My Kingdoms, but he’s aligned himself with the right people, and in turn, made this one of 2013’s sure-fire winners in the power metal department.