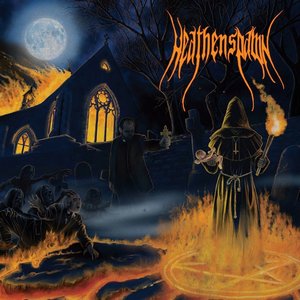 If Australia’s Heathenspawn had a slogan, it’d surely be something like, ‘bringing the death back to melodic death metal.’ The band went all out for their debut EP, enlisting the mighty Dan Swano himself to mix and master. Which should give some sort of image as to the professionalism shown for their first dip into the metal pool.

Heathenspawn is heavy and brutal, as a good death metal album should be, but it’s equally laced with supremely catchy melodies. While there are some definite differences, earlier Edge of Sanity isn’t a bad starting point if you are trying to envision their sound (nor is The Absence). No clean vocals, no watered down riffing, they just keep things moving through the five tracks shown here. Not even some keyboards and atmosphere (see “The Vatican Burns”) can keep the band from wandering into areas that feel too melodic. They counter melodies with blastbeats, high tempo riffing, and ominous growls that will have you ready to scream along, even if the lyrics tend to fit into the usual tropes. The aggression factor keeps the band from being lumped into the ‘melodeath’ category too much – it’s the type of release that even fans of traditional death metal can equally enjoy. It does tend to feel a bit familiar overall, but there’s plenty of energy behind it, as well as it being the band’s first output. Let’s see where they take it from here.

The usual cliché of wishing there was more to the release comes to mind, but that day will inevitably be here soon given the strength of this EP. This is ripping and inspired stuff – an excellent blend of brutality and melody.