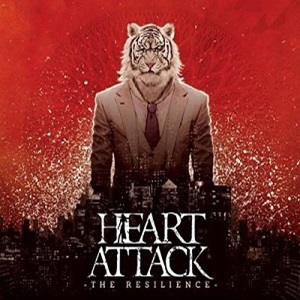 When needing more groove or modern thump to a tried and true sub-genre such as thrash comes into play, many European acts get it. Meaning – they know how to create strong melodic hooks and penetrating riffs even as they aurally obliterate everything put in their paths. Heart Attack from France formed in 2008, gaining prime opening slots for Exodus, Trivium, and Sepultura to name a few – beyond gracing the stage at the premiere metal festival in their home country Hellfest. This second album The Resilience is the first to hit these ears, but assuredly deserves kudos for its kick ass intensity sure to elevate adrenaline, circulate blood flow, and keep the slam happy hordes satiated.

Kévin Geyer as rhythm guitarist and vocalist provides a steady foundation due to his fervent screams, forceful verse work, and crunchy, heads down axe play – landing within the range of Machine Head, Pantera, and Evile on the remarkable “Fight to Overcome” plus locomotive chugger “Feed the Fire”. At times that crossover hardcore element peaks through certain sequences of this record – “Burn My Flesh” in particular, also featuring a sick groove-ish transition and some wah-wah lead break action from Chris Cesari, while the follow up “Congrats to People” contains single word buildups and gang background action that befits the best parts of Biohazard and Pro-Pain. The drumming from Christophe Icard kicks ass, effortlessly ramping up the beats per minute and then settling into some sinister power groove tempos that keep followers bouncing – “Burn My Flesh” and “Disorder” two surefire pleasers in that regard. Although most of the material glides by in 3-5 minute windows, the title cut that closes the record explores Heart Attack at their epic side instrumentally – opening with lighter, clean guitar fare before shifting between heavier rhythms and acoustic breaks that allow the listener a deeper understanding of the quartet’s obvious musicianship and proper skill sets in the thrash/groove metal platform.

Oddity cover art aside (who dresses up a tiger in a suit?), The Resilience delivers solid meat and potatoes material that gives the band multiple options for touring partners and could elevate their profile beyond European borders.