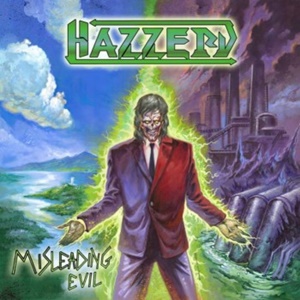 Hailing from Calgary, Canada and going through a couple of name changes since their 2012 inception (Forsaken and Hazard X previously), Hazzerd live to create a thrash/speed metal style that reflects a love of the old school classic metal output as well on this full-length Misleading Evil. What this means for the listener is the quartet inject much of their songwriting and arrangements with a proper understanding of catchy melodic hooks, especially in the guitar department, making this eight-song outing quite an exhilarating aural ride.

Check out a lot of the spider web-like transitions and lead philosophy Toryin Schadlich and Brendan Malychy employ for instance on “Absolute Destruction”. The building momentum, especially during the concluding half of the arrangement, gives off that Maiden/Priest meets early Metallica vibe – where your ears just perk up to the sonic swell of catchiness and intensity. Drummer Dylan Westendorp handles the vocals as well, racing with the material in a Havok/Death Angel-type voice as his bandmates deliver a modest supply of complementary gang vocals for proper emphasis – giving the twists of “The Execution of the Damned” proper aggression and balance. These gentlemen have the basics of thrash down, but their added musicianship emphasis and understanding of shifting dynamics puts them legions ahead of the pack. As an epic instrumental at almost eight-minutes the title track contains a serene, thoughtful intro with keyboard enhancement, a blitzkrieg of rhythms and tempo changes, and lead work that rivals the best, neoclassical oriented tastemakers from the Bay Area and beyond.

The production keeps Misleading Evil within that old-school realm as well – primitive and raw without killing the vibe Hazzerd wish to put across. Hopefully the band continues down this path of injecting their brand of thrash with classic/traditional interplay, as the four-piece possess the requisite tools and talent to execute an exciting take on the genre that will rivet and please many factions. Eagerness builds as to what Hazzerd can come up with next – for now this is another example of the newer breed giving the old guard a mighty kick in the tail. 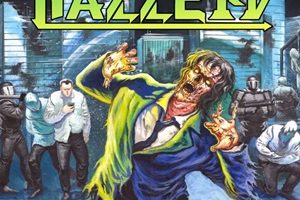