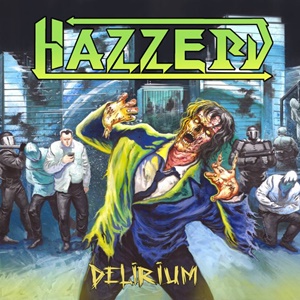 Canadian thrash has been a staple in this scribe’s listening habits ever since the 1980’s when Sacrifice, Voivod, Exciter, and Razor released records. Hazzerd from Calgary made a solid impact in 2017 with the Misleading Evil album, making enough of a buzz to move to M-Theory Audio for the quartet’s follow-up in Delirium. These musicians take influence from numerous old school traditional and thrash acts, while also keeping an eye on the current generation of younger bands throwing down the gauntlet for metal – ensuring that these ten tracks tow the line in modest underground to slightly mainstream appeal.

Wah-wah lead break antics float in and out of the shape shifting tempos and plentiful guitar harmonic aspects for opener “Sacrifice Them (In the Name of God)”, some of the galloping tempo changes and gang vocals reminding people of early Metallica, Iron Maiden, and Death Angel. Many of the tracks possess a slightly more adventurous and progressive nature this go around – Brendan Malycky and Toryin Schadlich elevating their shred / arpeggio skills and also challenging themselves and the listeners with broader riff strokes and clean accents to make “A Tormented Reality” and the six-minute plus “Call of the Void” instrumental two standouts. Hazzerd excel at knowing how to build out specific hooks into mesmerizing energy blockbusters – allowing for stop/start interplay moments where bassist David Sprague gets a bit of a spotlight during the neck whipping “Sanctuary for the Mad”. Calmer introspective passages that open “Waking Nightmare” give chase into a mid-tempo crunchy electric affair, the rhythms possessing a strong Heathen/Megadeth anthem-like flair, drummer /vocalist Dylan Westendorp up to the challenge as he races away with his percussion and word duties frantically. Once again securing Bay Area artist Andrei Bouzikov to design the insane asylum characters breaking free for the cover art, it’s obvious that the band mean business – offering substantive songs and plenty of melodic/harmonic hooks to latch onto.

Delirium will be for those thrash audiences that want a bit more progressive musicianship and meat on the bones of their pit-oriented tracks. And as such, the band succeeds once again in dealing out the goods. 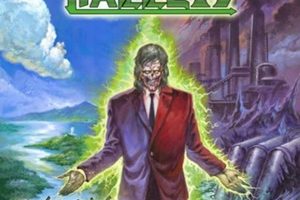