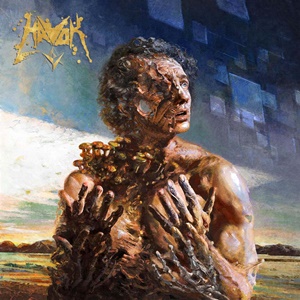 Unless you’ve been living off the grid from thrash at a club/small theater level worldwide, chances are you’ve seen Havok on stage at one time or another. A relentless touring machine, they’ve managed to make an impact for the new generation of bands through excellent work like Time Is Up and their last effort Conformicide. The core lineup now joined by newest bassist Brandon Bruce – V showcases all facets of the Havok sound – musically sharp, catchy and crunchy riffs aplenty, sinister vocals with plenty of gang supplementation, and taking aim at a lot of the social/political themes that many of their listeners also raise concerns with.

The songs vary between speedier affairs that mow down anyone in a pit (“Post-Truth Era” and “Phantom Force”), mid-tempo monsters that circulate those Metallica memories during Master of Puppets/And Justice For All album cycles (“Ritual of the Mind”), and the occasional epic that stretches things out with acoustic supplementation or illustrating a bit more of their intricacies for the classical/harmony touches as in “Panpsychism” or the eight-minute plus anti-suicide closer “Don’t Do It”. Brandon gets an ample chance throughout the record to add a proficient, up front funky/progressive bass touch that aids the hooks and semi-grooves for the aforementioned “Panpsychism” and “Interface with the Infinite” (love the Scruggs/Sanchez dual guitar tapping in spots). Reece Scruggs as a lead player is off the charts – pushing out work that sits in that Skolnick/Friedman class of shred and taste, while adding his own take and feel to the proceedings as his frenetic nature while acknowledging the theme of a specific track makes “Betrayed by Technology” and “Cosmetic Surgery” highlights that mesmerize and tantalize.

Pete Webber continues to push his drumming off the charts – speed, finesse, and accuracy benchmarks of course, while on this record often exploring more of the mid-tempo groove and steadier smaller nuances that keep the individuality track to track. The closer “Don’t Do It” is an epic that rivals the best Megadeth meets Iron Maiden tracks – unfolding from a ballad standpoint at the start to ramping up the octane and tempo for the final third of the song – David excelling at a calmer, melodic vocal delivery and then belting out his savage screams when called for.

Aiming to reach different levels in terms of musicianship in a palatable song format, V proves Havok aren’t content with repeating certain formulas, but garnering some new territory themselves in the thrash platform. Outstanding and well worth the deep dive.