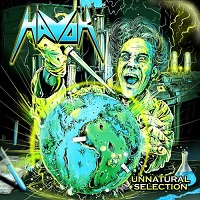 Denver’s Havok have been deservedly flying high on the success of their excellent 2011 album Time is Up, their impressive debut album in 2009’s Burn, and a busy touring schedule.  They’ve built a respectable name for themselves in a seemingly crowded thrash metal scene.  2013 has Havok releasing their third full-length, Unnatural Selection, and to their credit. they did not simply rehash another Time is Up (although an argument can be made that perhaps they should have).

Unnatural Selection starts off in their comfortable vein of thrash, bringing up recollections of Kreator, and sets a promising enough tone for the album.  But the trouble begins early with the awfully named “Give Me Liberty…or Give Me Death.”  It’s a pretty good song from an instrumental standpoint, but the trite political/anti-establishment lyrics and cheesy outro are a deal breaker.

The album peaks early with the highlights “It is True” and “Under the Gun.”  The former showcasing the best of Havok’s dominant styling on this album, which is reminiscent of 90’s Megadeth.  Unfortunately, it’s pretty much downhill from here on out.  The pointless “Waste of Life” begins a series of forgettable songs, stringing the album along with some moments of good guitar work, but ultimately disappointing with uninspiring, medium tempo tunes and few-and-far-between moments of ferocity.

Adding to my feeling that this album contains filler, Havok throws a faithful cover of Black Sabbath’s “Children of the Grave” into the mix, right before the title track “Unnatural Selection.”  Sure, we all love Sabbath, and they do a good job with the song, but I don’t need to hear another cover of this song, and here it’s doing more damage to the album than good.

Unnatural Selection is not entirely a bummer, but is certainly far from a great album.  It starts out with a flicker of hope, finds the band expanding their sound into another era of vintage metal, showcases their very solid instrumentation, but struggles significantly with the strength of songwriting and leaves this listener pretty underwhelmed.